The Sazerac and the Saturday-Night Special

The Sazerac might just be the best cocktail name out there. Some might argue for the Corpse Reviver or the One-Balled Dictator, and while these names are certainly cute, I’d say the Sazerac wins simply for the sound it makes when you say it–like one of those sound words inside a cartoon bubble box from old Batman comics.

I’ve been in New Orleans the past few days and have started off each evening with a Sazerac. It’s NOLA’s official cocktail, and many down here like to say that it’s the first cocktail. That last part’s not true–the word cocktail was in use well before Sazeracs hit the scene. Regardless, the original Sazerac was invented by Antoine Peychaud and used cognac (it’s named after Sazerac-de-Forge et fils, Peychaud’s favorite French brandy). Now it’s typically made with rye whiskey–although I think a high-rye bourbon such as Bulleit or Old Grand-Dad can fit the bill as well–and usually some combination of Peychaud’s bitters, sugar, and absinthe (or a substitute such as Herbsaint).

So what was the best Sazerac in my admittedly small sample set? Probably the one at the Carousel Bar at the Hotel Monteleone–it was balanced in taste and strength and just the right size (not too big, so it didn’t warm up too fast). Pardon me while I briefly turn this post into one of those drinking diaries that clutter the blogosphere with mediocre iPhone photography. 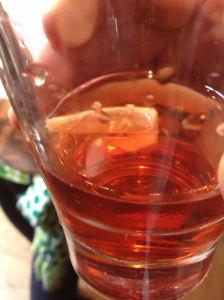 Sazerac at the Carousel Bar.

The Sazerac at Boucherie was also great, and went three fat fingers deep. I could have dove into that thing if it had a diving board. It was made with Jim Beam Rye, a Pernod absinthe rinse, and both Peychaud’s and Angostura bitters, with a twist of lemon. 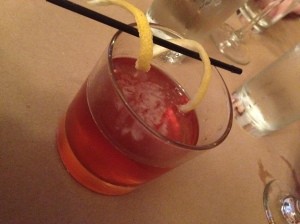 John Besh’s Restaurant August also does a nice job with the Sazerac at its bar. If Boucherie’s Sazerac is a cannon, then this one was a saturday-night special stuffed in your sock–fast and quick and does the job. It was also made with Sazerac Rye, which is becoming harder to find, just like people who carry around saturday-night specials in their socks. 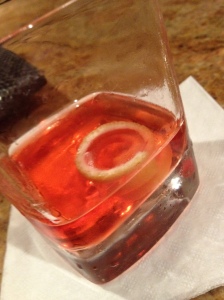 When Tasting Notes Get Ridiculous »
« What’ll You Have, Mr. President?