It’s no wonder the Paul Jones brand doesn’t exist anymore, judging from a series of ad campaigns that are some of the most befuddling I’ve come across.* This is a perfect example of a whiskey label that spent its lifetime hopping from one owner to the next, trying to find its marketing niche — it made quite a circuit around themes of deep-seated southern racism to Revolutionary War heroes to philosophizing camels.

This first ad is the best. The text is written in a dialect that sounds like some sort of lost language. On top of that, it barely makes sense. You also wonder why the ad features a talking camel, then realize that it’s because Paul Jones advertised its whiskey as “dry.”

…or maybe he would have been. Two sailors in the ad hold a conversation with the Camel. The big sailor is convinced the camel is actually a cigarette lighter because Americans can’t stand a product that “looks like what it is.” The camel articulately explains that “nothing is as it seems.” After the gears turn a bit, you realize that nobody really describes whiskey as “dry,” hence the choice of a confusing mascot.

Yes, alcohol is a drug, but not a drug nearly as interesting as the one used by whoever dreamed this one up. They should have consulted with the folks who invented the Camel cigarettes campaign — they at least had their camel drive cool cars and wear leather jackets. I suppose those were James Dean camels and these are Timothy Leary camels.

Image courtesy of the Gallery of Graphic Design

Here’s another one where a camel crashes a radio program to inform the world how dry he is.

And then there’s this one from Paul Jones, going way back, called “The Temptation of St. Anthony,” which I found on the Website for an auction house. This is pretty horrible. The camels were definitely an improvement over outright racism. 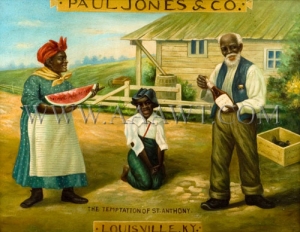 * Paul Jones was distilled by Frankfort Distillers, then the brand was apparently sold to Seagrams, but I’ve lost the thread after that. It’s not available in the U.S., although it’s entirely possible the brand still exists in some overseas market where it managed to gain a foothold. If you’ve seen it somewhere, let me know.

Is Bourbon Becoming Vodka? »
« The Most Ridiculous Whiskey Bottle in the World